Dear Lucy: I have been reading with interest the current news about measles outbreaks and note that many of us born between 1957 and 1989 may no longer be protected. Is MIT going to roll out an MMR booster for those of us who’ve only had one dose and are otherwise healthy enough to be vaccinated? —Spotty Immunity 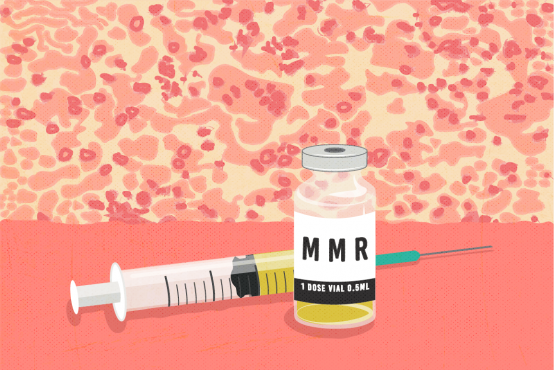 Dear Spot: What a timely question! According to figures reported earlier this week (April 29, 2019), measles cases in the United States this year have reached 704 in 22 states, including Massachusetts. It’s the highest number of cases since 1994 and a disappointment to the country’s health officials, who declared the vaccine-preventable disease eliminated in 2000. Given the illness’s long incubation period—two weeks, on average, from exposure to rash—public health officials expect the situation to get worse before it gets better.

That said, MIT Medical’s associate medical director for primary care, Dr. Patrick Egan, believes that most members of the Institute community have sufficient immunity to avoid catching measles if exposed to the illness. “Folks born before 1957 were almost certainly exposed to measles in the many epidemics that occurred in the US before vaccines were available,” he notes. “And most individuals born after that date have sufficient immunity through vaccination.”

However, he notes, two groups of people are at higher risk. “The first group, folks who received vaccines between 1963 and 1967, may have received a ‘killed’ vaccine, which was less effective,” Egan notes. “The other group at risk includes people who did not receive two doses of vaccine.” According to the CDC, a single dose of the MMR vaccine is roughly 93 percent effective; vaccine effectiveness jumps to 97 percent with a second dose.

Egan recommends that people who think they may be at higher risk check their vaccine records, if available. “Look to see if you received the ‘live’-virus vaccine or ‘killed’-virus vaccine,” he advises, “and whether you got one or two doses. Most folks will be able to get that information and can feel secure that they are protected from measles if they received two doses of the ‘live’ vaccine.”

While MIT Medical doesn’t plan to do any formal screening or outreach at this point, Egan suggests that patients contact their primary care providers (PCPs) directly if they know they’re in a high-risk group—or, in the absence of records, suspect that they might be. “Your PCP may suggest a blood test, known as a ‘titer,’ to check your level of immunity,” he says. “Or they may just give you a booster shot.”

Lucy thanks Dr. Egan for answering this question, and she hopes you found his answer reassuring. But if you know that you are in a high-risk group or have any doubt about your level of immunity, Lucy encourages you to contact your PCP directly to discuss the best course of action. Thanks again for asking this apt question and giving Lucy the chance to remind her readers that vaccinations work! —Lucy