Breakthrough infections: What you need to know

Three members of the New York Yankees pitching staff. British Health Secretary Sajid Javid. Two passengers on a “fully vaccinated cruise.” Three members of a family on their first out-of-state vacation in 18 months. These are just a few recent cases of “breakthrough infections,” which the CDC defines as any positive test for infection with the SARS-CoV-2 virus occurring more than two weeks after an individual has received the final dose of a COVID-19 vaccine. 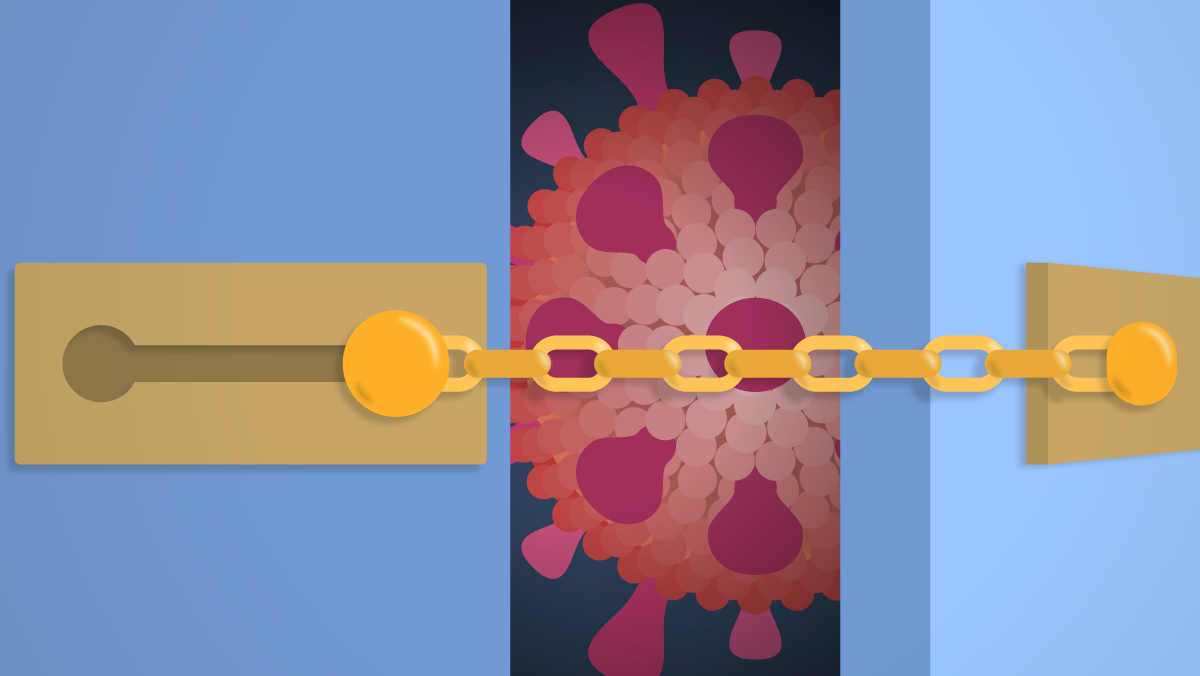 As the more contagious Delta variant of the virus sweeps through the country, breakthrough infections are in the news, on our social media feeds and, increasingly, on the minds of those of us who have followed public-health advice to roll up our sleeves and get vaccinated.

I’m vaccinated, but how worried should I be? It’s the question many of us are asking. Here’s what you need to know:

We can certainly question the completeness of that data: Are we missing a significant number of asymptomatic or very mild cases? Almost certainly. Are some positive tests not being reported? Very likely. Will the number of breakthrough cases increase in the coming weeks and months due to the more transmissible Delta variant? For sure. But even if the true number of breakthrough cases is many times higher than official counts or estimates, it would still provide overwhelming evidence that vaccines are working even better than once thought possible.

Breakthrough infections are expected. No vaccine is perfect, but it’s useful to consider just how good these vaccines really are. It was only about 13 months ago that the FDA just released its criteria for the development of a COVID-19 vaccine. To win approval, the agency said, a vaccine should be shown to “prevent disease or decrease its severity in at least 50% of people who are vaccinated.”

At least 50 percent efficacy. It might seem like a low bar, but that’s comparable to the annual influenza vaccine, which prevents millions of illnesses and thousands of deaths every year, even when scientists don’t do the best job of matching the vaccine to the flu viruses that end up in circulation. For example, in 2019, when the flu vaccine had an efficacy value of just 45 percent, the shot is estimated to have prevented 7.52 million illnesses, 3.69 million medical visits, 105,000 hospitalizations, and 6,300 deaths.

Vaccinated people are well protected from severe illness. As with the annual flu shot, people who become ill with COVID-19 after vaccination generally get a whole lot less sick than they otherwise would have been. But because the overall efficacy of the COVID vaccines is so much higher than your annual flu shot, they are much more protective against serious illness than your yearly flu shot. Even with the Delta variant.

The CDC’s almost impossibly broad definition of a “breakthrough infection” encompasses everyone from completely asymptomatic individuals identified through routine surveillance testing to people who become severely ill, end up in the hospital, or die. But from the beginning, the COVID vaccine was aimed at preventing illness, not infection. And all available data shows that it does that very well.

In addition, the vast majority of those who do become seriously ill from breakthrough infections are older or have underlying medical conditions. An Israeli study, for example, showed that 96 percent of patients hospitalized with breakthrough infections had preexisting health conditions, such as hypertension, congestive heart failure, or diabetes. And CDC data shows that three-quarters of those hospitalized with breakthrough infections in the US were aged 65 and older. This is in line with what we’ve known all along — that certain underlying medical conditions increase the risk of severe COVID-19 and that the likelihood of severe illness or death from COVID-19 increases steadily with age.

But a new study of 218 vaccinated and unvaccinated patients hospitalized in Singapore with infection by the new Delta variant shows that vaccines provide significant protection, even for older patients. All individuals with confirmed COVID-19 in Singapore are admitted to the hospital for inpatient evaluation and isolation, regardless of symptom severity, but although the 84 vaccinated patients in this study were significantly older, on average, than the unvaccinated cohort (56 vs. 39.5 years), they were much less ill. Vaccine-breakthrough patients were significantly more likely to have no symptoms at all (28.2 vs 9.2%). And among those who were symptomatic, vaccinated individuals had fewer symptoms overall, lower peak measures of systemic inflammation, and better clinical outcomes. They were less likely to develop pneumonia, require supplementary oxygen, or be admitted to the ICU.

In places with high vaccination rates, vaccinated people will constitute a high percentage of new cases. There have been a number of news stories about the large cluster of COVID-19 cases traced to the recent Fourth of July weekend in Provincetown (Barnstable County), Massachusetts, after thousands of mostly unmasked people packed bars, clubs, restaurants, and other indoor venues to celebrate the rainy holiday weekend. The outbreak, which tests showed to be overwhelmingly attributable to the Delta variant, was the subject of an in-depth CDC report covering the first 469 Massachusetts cases associated with the outbreak (adding out-of-state residents to the mix, the number has now grown to more than 900).

But one number has dominated the headlines: 74. Of those initial 469 cases, 74 percent occurred in fully vaccinated individuals. While this particular data point has fueled concern among vaccinated individuals, experts say that a closer look at the numbers actually provides evidence of vaccine effectiveness. “Of the 900 cases related to the Provincetown cluster, there have been no deaths, 7 hospitalizations, and the symptoms are largely mild,” tweeted Town Manager Alex Morse. At least one of the hospitalized individuals was unvaccinated, according to the CDC; two others, while vaccinated, had underlying medical conditions.

The true lesson of the Provincetown cluster, it now seems, is how much worse it could have been.

While it may seem counterintuitive, the coming weeks are likely to see vaccinated people becoming a higher percentage of both cases and hospitalizations. This is partly because the Delta variant leads to a higher number of breakthrough infections and partly because older, higher-risk adults are more likely to be vaccinated. But it’s also a mathematical certainty, especially in places with very high vaccination rates. “When a high percentage of people start wearing seatbelts, a higher percentage of motor vehicle fatalities are going to involve people who are wearing seatbelts,” says Associate Medical Director Shawn Ferullo. “But the overall fatality rate drops dramatically. COVID vaccination works the same way.”

Nearly 100 percent of people who regularly access campus are fully vaccinated, according to Ferullo, so it’s inevitable that most positive cases identified by MIT’s routine surveillance testing would involve fully vaccinated people. “We’ve had close to 30 positive tests in the last two and a half weeks,” Ferullo says. “Not surprisingly, nearly all of them were fully vaccinated.” The number of cases is rising due to the Delta variant, he adds, “But it’s scary to think what those numbers would be if we were not vaccinated.”

Vaccinated people can transmit the virus. Evidence that vaccinated people had transmitted the virus to others — both vaccinated and unvaccinated — came as a shock to many people reading news stories about the Provincetown outbreak. However, as we noted in one of our first articles on the Delta variant, this type of transmission had already been documented in other countries. Two large clusters in Singapore began with fully vaccinated individuals, and a study of breakthrough infections in Indian healthcare workers showed that those infected with the Delta variant transmitted the virus, on average, to at least two of their coworkers. (Those infected with other strains of the virus tended not to infect anyone else.) “We’ve seen evidence of vaccinated-to-vaccinated transmission in our contact tracing at MIT as well,” says Ferullo.

Researchers who studied some of the first people to become infected with the Delta strain in Mainland China found that those individuals had viral loads more than 1,000 times higher at the time of diagnosis, compared to individuals infected with the original strain of the virus. (We wrote about this study last month.) Now the CDC reports virtually identical PCR cycle threshold (Ct) values in test specimens from vaccinated and unvaccinated individuals who were part of the Provincetown cluster.

While many have interpreted this result as indicating that vaccinated people who become infected with the Delta variant are just as infectious as unvaccinated people who are infected, Ferullo and others urge caution. “It’s important to remember that the PCR test detects viral RNA, not infectious virus. Detectable viral RNA doesn’t necessarily correlate with infectiousness. The only way to determine if an individual is infectious would be to culture the specimen. That means inoculating the virus into cell culture to see if it will grow,” Ferullo explains. “Of course, the safest thing is to assume that anyone with a positive PCR test is infectious, which is why we ask these individuals to self-isolate. But it’s possible that two individuals could carry the same amount of detectable viral RNA in their nostrils, even if one of them is much less infectious.”

That’s because of the speed with which the immune system responds in a vaccinated individual, Ferullo explains. “Once you’re fully vaccinated, your immune system is on standby, ready to fight the virus. If you are infected, it springs into action quickly, preventing newly synthesized virus from being shed and killing infected cells. An unvaccinated person can also mount an immune response, but it takes a lot longer, which gives the virus more time to replicate and be passed on to others.”

Indeed, data from the Singapore hospital study provides strong evidence that the virus is quashed relatively quickly in vaccinated individuals. As in the Provincetown study, those researchers found similar Ct levels in both groups at time of diagnosis, but viral loads decreased faster in vaccinated patients. In other words, even if vaccinated individuals are equally infectious early in the course of a breakthrough infection, it appears that they stop shedding virus at least three days earlier, on average.

Less fear, more caution. “The takeaway,” says Medical Director Cecilia Stuopis, “is that our individual risk is small, but our collective responsibility is great. In other words, while we are well-protected by vaccination, to keep our community safe, we need to be willing to add additional layers of protection for now — masking indoors, distancing, and avoiding risky situations. The virus isn’t going away, and we can’t control how it will evolve, but we can control how we respond, and that can change the course of the pandemic.”