Delta’s here; I’m vaccinated; how cautious should I be?

I read your article, I’m vaccinated; but how safe am I, really? And I understand why masks are no longer required in many public places in Massachusetts. But with everything I’m hearing about the Delta variant, I’m concerned about the safety of my unvaccinated family members — like my 11-year-old son, who isn’t eligible to be vaccinated yet.

I was fully vaccinated with J&J months ago, but I wonder if I would be putting my son at risk if I were to take off my mask in indoor settings where I don’t know the vaccination status of other people. At this point, I am continuing to wear my mask whenever I am indoors with folks who may not be vaccinated, like at the grocery store. Am I being unnecessarily cautious? 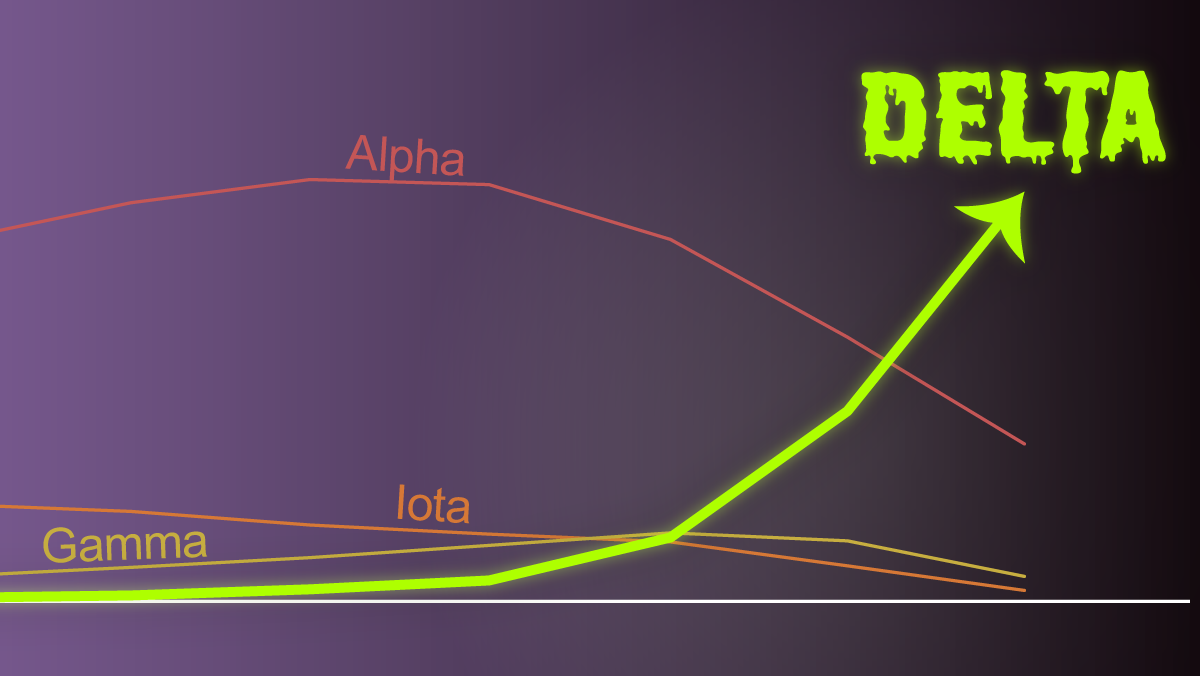 We’ve been getting questions like this more and more often as the Delta variant increases in prevalence. First identified in India in December 2020, Delta has now spread to more than 100 additional countries, according to the World Health Organization (WHO). In less than two months, it went from comprising between one and two percent of all new COVID-19 cases in the United States to more than 50 percent today. And that didn’t happen by chance. Delta is the fastest and fittest SARS-CoV-2 variant to reach our shores. As we’ve seen elsewhere, once the Delta variant arrives, it takes over.

When designating a “variant of concern,” the WHO and CDC look for specific mutations that might cause that variant to be more transmissible, more severe, more likely to evade the protection conferred by prior infection or vaccination, and/or more difficult to treat or diagnose. Delta checks off at least two of those boxes in a big way.

More transmissible? Check. The Delta variant is estimated to be about 60 percent more transmissible than the Alpha variant, which was about 50 percent more transmissible than the original version of the virus. Like Alpha, Delta has mutations in the spike protein, which the virus uses to attach to and infect human cells. These mutations may allow it to reproduce more efficiently, making more copies of itself compared to other versions of the virus, and leading to higher viral loads in infected individuals. People with higher viral loads shed more virus and are more likely to pass the infection to someone else.

Still, the ease with which the Delta variant passes from one person to another has caught public health experts by surprise. During a June outbreak in Australia, where the virus had been previously well controlled despite an extremely low vaccination rate, New South Wales Health Minister Jeroen Weimar warned that transmission had occurred with only “fleeting contact” between individuals. For example, contact tracing and genomic sequencing showed that a woman in her 70s was infected while sitting outside a cafe visited by “Patient Zero,” an airport limo driver. In another instance, the virus seems to have been transmitted in the time it took for two unmasked strangers to pass each other in a shopping center, an encounter captured by mall security cameras.

More likely to evade the protection conferred by prior infection or vaccination? Check. Because SARS-CoV-2 antibodies target the version of the spike protein to which they were originally exposed, changes to its spike protein also make Delta better at evading the antibodies someone has produced in response to vaccination or previous infection with another version of the virus. Full vaccination appears to be significantly more protective than partial vaccination or prior infection, but all tested vaccines showed diminished effectiveness against Delta, compared to other versions of the virus.

A recent study published in Nature showed that antibodies from recovered individuals were four times less potent against Delta than Alpha. Individuals who had received only one dose of Pfizer or AstraZeneca vaccines produced almost no neutralizing antibodies against the Delta variant. On the other hand, individuals fully vaccinated with both doses of Pfizer or AstraZeneca vaccines generated a neutralizing antibody response 95 percent of the time, replicating the results of an earlier study. Moderna and Johnson & Johnson have reported similar findings.

Real-world data also shows that all three vaccines authorized for emergency use in the U.S., and similar vaccines in use elsewhere, protect fully vaccinated individuals against severe disease and death. (And, no, you still don’t need a booster.) An Associated Press analysis of CDC data from May revealed that infections in fully vaccinated people accounted for only about 0.1 percent of  COVID-19 hospitalizations that month, and only about 150 of the more than 18,000 COVID-19 deaths (0.8 percent). Similarly, CDC Director Rochelle Walensky said at a July 1 White House briefing that preliminary data for the year to date suggests that about 99.5 percent of COVID-19 deaths in the U.S. occurred in unvaccinated people.

In other words, your vaccine is likely to protect you from serious illness. But it may not protect your unvaccinated son. That’s because the Delta variant is more likely than other forms of the virus to cause breakthrough infections in people who have been vaccinated, and vaccinated people who become infected with this variant are more likely to spread it to others.

Real-world data also demonstrates the ease with which vaccinated people can spread the Delta variant. For example, two large clusters in Singapore began with fully vaccinated individuals who had only mild, cold-like symptoms: A fully vaccinated 46-year-old nurse at Tan Tock Seng Hospital was at the center of a cluster that swelled to 40 cases. A cluster of more than 100 began with an 88-year-old, fully-vaccinated janitor at Changi Airport. In both of these clusters and others in the Singapore outbreak, the virus was passed to, and from, both unvaccinated and vaccinated individuals. This can be clearly seen in a visualization of clusters comprising 897 cases during a two-month period.

What’s the right level of caution? When it comes to risk assessment, the environment matters. Not just immediate environmental factors like ventilation, crowd size, and the like, but also the bigger geographic picture. What’s the vaccination rate in your area? Overall, Massachusetts has one of the highest vaccination rates in the country, but certain areas of the state lag behind. Is the positive-test percentage low and holding where you are, or is it starting to climb? What’s the proportion of new cases in your region attributed to the Delta variant? For example, for the week ending July 3, Delta was estimated to account for only about 38 percent of new cases in New England. For the midwestern states of Iowa, Kansas, Missouri, and Nebraska, it was 87 percent. But, of course, even if Delta isn’t yet the predominant variant in your area, it will be soon.

So, should you continue to mask up in public? For vaccinated individuals like you, with still-unvaccinated or otherwise vulnerable family members, that extra caution makes a lot of sense. But, says Medical Director Cecilia Stuopis, dealing with this new variant may demand some extra caution from all of us. “We don’t need to panic,” she says, “but we do need to take personal responsibility for doing what’s necessary to protect ourselves, our families, and our communities.” That starts with getting vaccinated, she emphasizes, but it doesn’t end there. “You can still wear a mask,” she says. “You can still avoid crowded indoor situations. You can still avoid eating in large groups.”

At this point, human behavior will likely be the most important determinant of the pandemic’s course, say Stuopis and others. “Right now, it’s Delta,” Stuopis observes. “In the fall it may be Kappa or some other, fitter, variant. We can’t be complacent. We are going to be living with this virus in some form or another for the foreseeable future, but our actions right now can determine what that future will be.”