Four early mornings this December found the lobby of MIT’s Z-Center abuzz with activity as MedLinks volunteers came together to assemble hundreds of snack bags for students on their way to final exams. MedLinks are undergraduate peer health advocates whose usual tasks revolve around answering questions about campus resources or handing out over-the-counter medications and condoms. But they play an expanded and important role during finals weeks at the Institute. 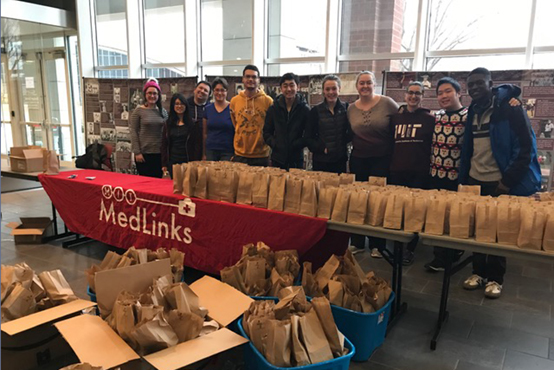 “Many students are in such a rush during exam week that they do not eat breakfast, or they forget to bring a snack—and finals take three hours each,” explains MedLinks Program Manager Greg Baker. “That’s where we come in.” In fact, MedLinks have been providing food, snacks, and friendly words of encouragement to their fellow students during every finals week for more than a decade.

These annual events are sponsored by the Large Event Fund of the Association of Student Activities. The fund is intended to bring events to the MIT community that would be unable to happen without additional funding.

This year, from December 18–21, 25 MedLinks volunteers distributed 2290 breakfast bags that included a Kind Bar, string cheese, and a fruit snack. They also handed out a few hundred more individual packets of string cheese. “I’m very grateful to work with such fantastic volunteers, who gave of their time and energy during one of the most stressful weeks of the semester,” Baker says. “I’m also grateful that I won’t have to see thousands of granola bars and paper bags in my office again until the next Finals Snack Event in May!”