ComMITment to Care award winners show that some things are timeless
May 13, 2015 | Cara Giaimo

MIT Medical’s providers have participated in more than a million digital clinical encounters this past year. But the morning of May 6 was decidedly face to face, as more than 200 staff members gathered to honor their colleagues at the fifteenth annual ComMITment to Care Awards.

Attendees marveled at then-and-now photos of staff members and browsed a history of the department while they enjoyed breakfast. Even as clinical methods, faces, and locations change, the core doesn’t budge,” said Diversity and Inclusion Manager Diane Magnuson in her opening remarks. “No matter who’s in the building, or what the technology is, our commitment to care remains the same,” she emphasized.

The winners bore this out. The Individual Award went to nurse coordinator Nicole Napier, described as the “backbone” of the OB/GYN department for more than a decade. “She can step into any shoes when needed,” whether it’s to motivate team members or design patient-tracking software, said director of operations Deborah Friscino, who presented the award.

Claims and Member Service administrator Leslie Patton received the Patient’s Choice Award and a standing ovation for the “compassionate and nonjudgmental” care she provided to a struggling family. Patton, who has been with MIT Medical for 32 years, said she was “really honored” by the award. “It’s a family, and I feel blessed to have been a part of it,” she commented after the ceremony.

Patton crossed the stage twice — she is also a member of the Claims and Member Services Backlog Reconciliation Team, recognized for their speedy and conscientious response to an administrative pileup. Donna Green, Clyde Hunte, Beverly Rodriguez, Justus Perry, and Lawanda Santiago make up the rest of the award-winning team. 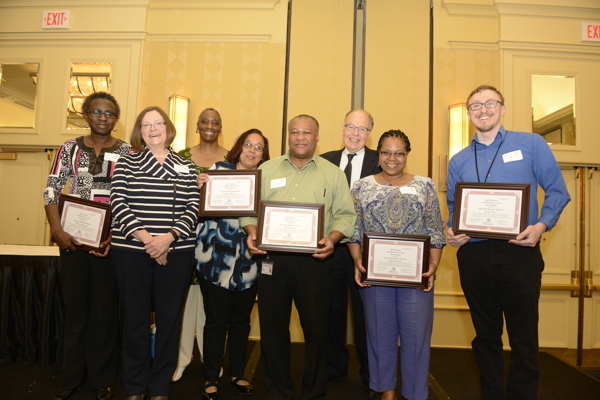 The Breakout Star Award, reserved for the newest team members, went to Health Plans manager Sharon Casey for her across-the-board excellence. Sharon’s ability to learn quickly, her team-oriented approach, and her willingness to help out in all aspects of the Health Plans office were among the many reasons she earned the award.

Winners will have their names inscribed on “leaves” of the flourishing ComMITment to Care “tree” on the second floor of MIT Medical. They also receive a plaque and a monetary prize.

In addition to the awards, MIT Medical director William Kettyle, who has announced his retirement, was honored for 21 years of jovial and dedicated commitment to MIT and MIT Medical. The room took a moment to thank Kettyle for his leadership and legacy and he was presented with a clock in honor of his service.

After themed gatherings in years past, Magnuson and her co-organizer, chief radiologic technologist Lisa Owens, said they decided to make this year’s ceremony “strictly about the care.”

“When we keep the focus there, on the work, people have a good time,” Owens said. She ended the ceremony with a fitting valediction: “Thank you, everybody. See you back at work.”