A: The one that you can get.

Clinical trials, like those for the new COVID-19 vaccines, generate a lot of numbers. But media reports about the results of these vaccine trials have focused almost entirely on a single data point — efficacy. Is this a mistake? 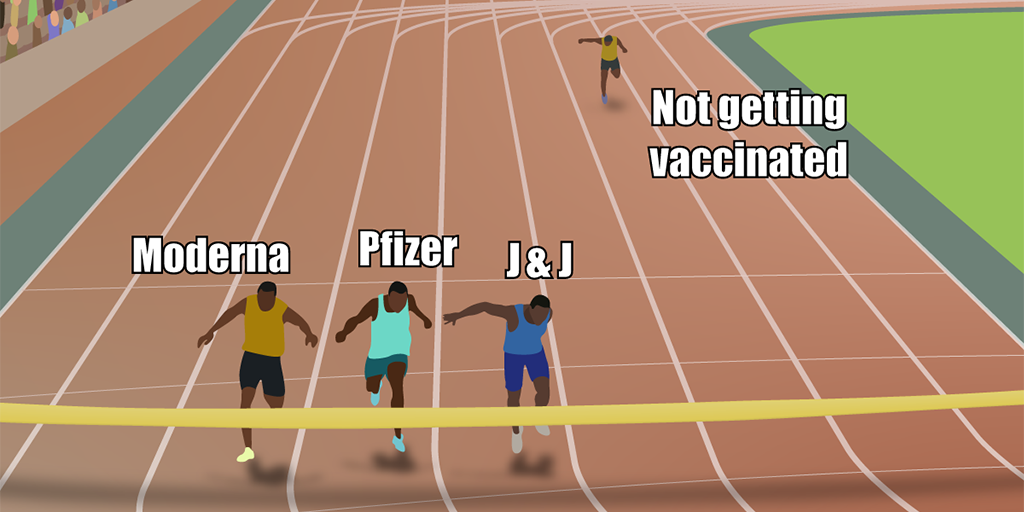 Associate Medical Director Shawn Ferullo thinks so. “Efficacy is far from the whole story,” he says.

A vaccine’s “efficacy” is a measure of how effective it is at preventing any illness at all, however mild. Efficacy values for COVID-19 vaccines were computed by comparing the relative difference between the fraction of individuals in Phase Three vaccine and placebo groups who developed symptoms and tested positive.

“If you look at efficacy numbers alone, the newly approved Johnson & Johnson (J&J) vaccine, with a 66 percent efficacy rate, looks substantially worse than the Pfizer or Moderna vaccines, which both came in at around 95 percent,” Ferullo acknowledges. “But we need to look at these numbers in context. This context includes differences in how each clinical trial was conducted and a more practical view of what efficacy actually means.”

First of all, these vaccines were not tested head to head, so it’s impossible to compare efficacy values. Clinical trials were done at different times with different people in different places where different strains of the virus were circulating. The Pfizer and Moderna Phase Three trials ran from July through November of last year. Johnson & Johnson’s trial began last September and ended on January 22 of this year. Moderna’s clinical trial involved a diverse group of U.S. participants. Pfizer/BioNTech tested its vaccine in the U.S., Germany, Turkey, South Africa, Brazil, and Argentina. Participants in the J&J trial came from the U.S., Argentina, Brazil, Chile, Colombia, Mexico, Peru, and South Africa.

Secondly, every single one of the currently approved COVID-19 vaccines is more effective at preventing COVID-19 than the average seasonal flu shot is at preventing influenza. Every single one. As the CDC explains, “flu vaccination reduces the risk of flu illness by between 40% and 60% among the overall population during seasons when most circulating flu viruses are well-matched to the flu vaccine.” In other words, even when scientists come closest to getting it right, that annual flu shot — the one we line up so eagerly to get — is only about 50 percent effective.

So why get a flu shot? Because even if you get the flu after being vaccinated, you’re likely to be a lot less sick than you would otherwise have been. By CDC calculations, the 2019–2020 flu vaccine, which had an efficacy value of just 45 percent, prevented an estimated 7.52 million illnesses, 3.69 million medical visits, 105,000 hospitalizations, and 6,300 deaths.

So, what number should we use to evaluate the effectiveness of these vaccines? “Zero,” says Ferullo. “Zero deaths. Zero cases of serious illness requiring hospitalization. All three currently approved vaccines have been shown to be 100 percent effective at preventing hospitalization and death,” he emphasizes.

“We can’t lose sight of the fact that we are dealing with a virus to which we have no natural immunity. This is a virus that can cause months of debilitating symptoms, permanent disability, or even death,” he continues. “With the approval of the new Johnson & Johnson vaccine, we now have three safe and effective vaccines available. And those individuals who get a vaccine — any vaccine — are the ones most likely to come through this pandemic alive and unscathed.”

How the vaccines work

mRNA vaccines, like the Pfizer/Biotech and Moderna vaccines, contain instructions (mRNA) for the body’s cells to make a harmless piece of “spike protein.” (The spike protein is found on the surface of the SARS-CoV-2 virus that causes COVID-19 and plays a major role in allowing the virus to gain access to human cells.) Once the mRNA uses the body’s cells to make the spike protein piece, the mRNA degrades and disappears. The immune system begins building an immune response to the harmless spike protein and makes the same kind of antibodies it would make during a natural COVID-19 illness. Antibodies that can recognize the virus’s spike protein should prevent the virus from entering cells in the first place and protect against future infection.

Adenovirus vector vaccines, like the Johnson & Johnson vaccine, take the more traditional approach of using a modified version of a harmless common cold virus (the vector) to deliver instructions to our cells. In an adenovirus vector vaccine, the harmless vector virus enters the cells in our body and uses the cellular machinery to produce a harmless replica of “spike protein” found on the surface of the SARS-CoV-2 virus that causes COVID-19. (This spike protein plays a major role in allowing the virus to gain access to human cells.) The immune system begins building an immune response to the harmless spike protein and makes the same kind of antibodies it would make during a natural COVID-19 illness. Antibodies that can recognize the virus’s spike protein should prevent the virus from entering cells in the first place and protect against future infection.