What’s up with these new COVID-19 variants?

Where did these new COVID-19 variants come from, and why are they more contagious? What should we be doing to protect ourselves? And if I test positive for the virus at MIT or elsewhere, will someone be able to tell me which variant I’m infected with? 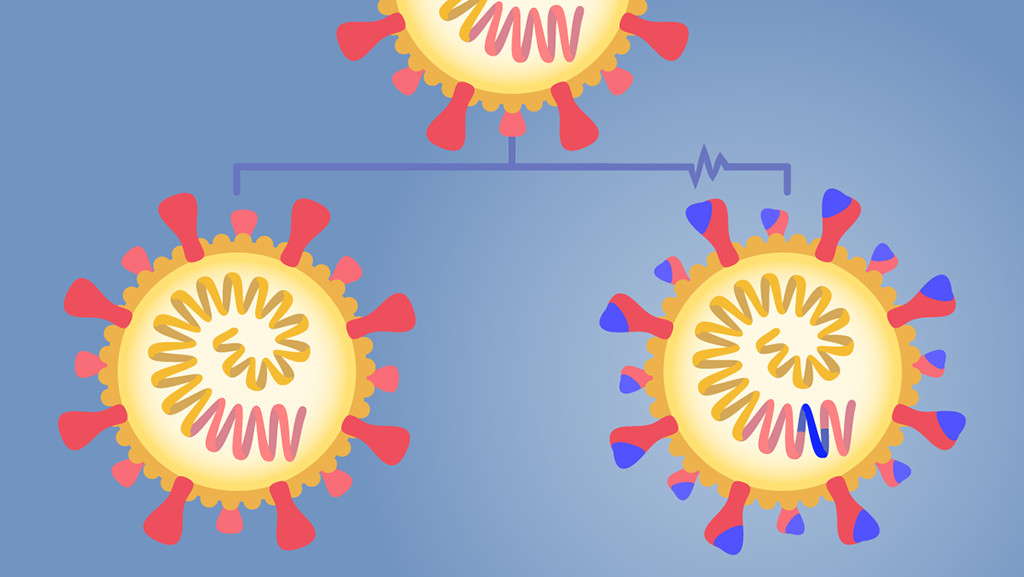 Where did these variants come from? They arose like any other viral variants, the result of small changes in the genetic code of the SARS-CoV-2 virus, which causes COVID-19.

A virus reproduces by invading human cells and commandeering their cellular machinery to make copies of itself. Over time, however, these genetic copies accumulate small errors, or mutations. Coronaviruses, like SARS-CoV-2, are among the few RNA viruses with a molecular proofreader, a protein that checks for copying errors and corrects them. This may be one reason why common antiviral medications, which work by inducing mutations that weaken a virus, haven’t been effective against COVID-19. But the virus’s proofreading mechanism has also slowed the speed at which it has mutated.

Still, all viruses mutate, and SARS-CoV-2 has been mutating slowly and steadily since making the jump to humans. Over time, these mutations have given rise to a number of variants — groups of coronaviruses, each of which share the same set of distinctive, genetic mutations.

Sometimes a viral variant simply fizzles out. Other variants may spread by chance, due to superspreading events or other circumstances that expose a large number of people to that particular version of the virus. But sometimes the specific genetic changes in a particular variant can make it able to spread more effectively, which allows it to beat out other local variants and become dominant.

The latter appears to be what happened with three current variants of concern: B.1.1.7 (sometimes referred to as VOC 202012/01), first identified in the U.K. in September 2020; B.1.351 (sometimes referred to as 501Y.V2), discovered in South Africa at the end of December 2020; and P.1, which, in December 2020, was found to account for nearly half of new COVID-19 infections in Manaus, Brazil. (And, yes, these variants desperately need new names.) All three variants are now spreading globally and have been found in the U.S as well. CDC models suggest that B.1.1.7, identified in 44 states so far, has the potential to increase the U.S. pandemic trajectory in the coming months, becoming the dominant U.S. strain by March. (We’re also keeping an eye on a fourth variant, which comes in two forms labeled B.1.427 and B.1.429, that is now spreading rapidly in California.)

But why are these variants more contagious?
We can’t say for sure, but there are a couple of theories. One is that people infected with one of these variants have higher viral loads. In other words, these variants might cause infected people to carry more virus in their noses and throats, meaning that they would expel more viral particles when they breathe, talk, or cough. The results of one early study on the B.1.1.7 variant seemed to support this theory, but a more recent, larger and more rigorous study did not find higher viral loads in individuals infected with B.1.1.7.

A second possibility is that these variants are “stickier” — more efficient at adhering to and inserting themselves into uninfected cells — thus requiring a smaller amount of virus to cause infection. This would raise the likelihood of transmission in any encounter between infected and uninfected individuals. Though these three variants arose independently, all share one specific mutation, known as N501Y. This mutation affects the virus’s spike protein, which plays a major role in allowing the virus to gain access to human cells. There’s some evidence that this mutation improves the spike protein’s ability to bind to the cells, which could increase the variants’ ability to infect hosts.

How much more transmissible are these variants?
Again, that’s hard to say. Initial evidence for increased transmissibility of any variant comes from epidemiological observation. For example, the U.K. variant, B.1.1.7, first surfaced in September but, by the end of December, accounted for more than 60 percent of all new cases in the London area. The latest estimates are that this variant is anywhere from 43 to 82 percent more transmissible.

There’s also evidence for increased transmissibility of the P.1 and B.1.351 variants. In addition, both contain a mutation known as E484K, which helps the virus slip past the body’s immune defenses. In addition to increased transmissibility, there are concerns that this mutation might make people who have recovered from COVID-19 more vulnerable to reinfection with one of these variants. There are also concerns that current vaccines will be less effective against variants with this mutation.

What do I need to do to protect myself from these variants?
You need to keep taking the precautions you’re probably already taking, but be even more vigilant about it. To slow the spread of new variants, the CDC is calling for “universal and increased compliance with mitigation strategies, including distancing and masking,” and, when available, vaccination.

The key to protecting yourself from any COVID-19 variant is to reduce your likelihood of exposure. Don’t let down your guard. Know how to assess risk, and avoid situations where the risk of transmission is higher — closed spaces, crowds, and close contacts. If you can’t avoid one of these higher-risk settings, limit the amount of time you spend there. We also recommend upping your mask game, paying extra attention to layers and fit.

Meanwhile, public health agencies, like the CDC, are working to identify new variants and track their spread. The National SARS-CoV-2 Strain Surveillance program (NS3), established in November, represents one such effort. Every week, NS3 sequences and evaluates hundreds of SARS-CoV-2 samples from state health departments and other public health agencies in an attempt to identify variants of concern.

But individual COVID-19 tests are not being sequenced. If you test positive, there’s no way to know whether you were infected by one of the new variants. “These high-level sequencing and surveillance efforts are crucial for public health monitoring, but they’re not necessary on a clinical level,” says Associate Medical Director Shawn Ferullo.

“Individual COVID-19 tests at MIT and elsewhere will still come back as positive or negative,” Ferullo says. The CDC notes that new viral variants are just as likely to be detected by existing PCR tests. “Since the variants all cause the same illness, knowing the specific variant involved has no implications for treatment,” Ferullo adds.

“Precautions like masking, distancing, and staying within your bubble are more important now than ever,” he emphasizes. “These new variants may be more transmissible, but they spread in exactly the same ways. The precautions that have kept our community safe so far will continue to be effective, as long as we continue to stay the course. We already know how to protect ourselves from this virus; we just need to do it.”