I want to get pregnant; should I avoid getting the COVID-19 vaccine?

“This is one of the most common questions I’ve been getting lately,” says Medical Director and Obstetrician-Gynecologist Cecilia Stuopis. “Across social media and the internet, women are being bombarded with misinformation about the COVID-19 vaccine harming fertility,” she says. “And these posts are unequivocally false. In fact, if at all possible, the safest thing you can do is to get vaccinated before conceiving.” 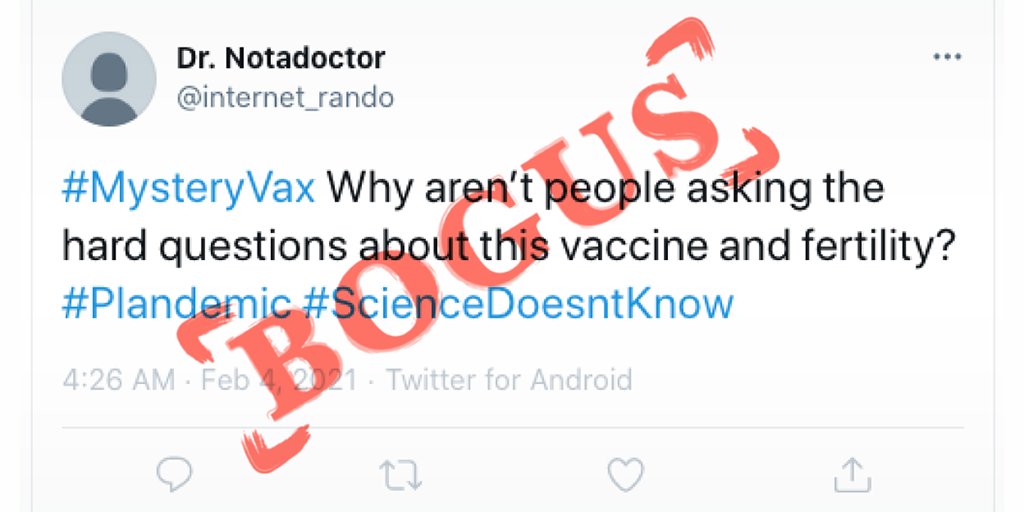 These false claims, which began circulating on social media in early December, have to do with a short string of genetic code shared by the virus’s spike protein — those sharp bumps protruding from its surface — and a protein called syncytin-1, which is an important component of the placenta in humans and other mammals. The COVID-19 vaccine prompts the immune system to make antibodies targeting the SARS-CoV-2 spike protein, which plays a major role in allowing the virus to gain access to human cells. Antibodies that can recognize the virus’s spike protein should prevent the virus from entering cells in the first place.

“In addition,” Stuopis points out, “the vaccine doesn’t remain in your body in any form. It doesn’t enter the nucleus of the cell, so it doesn’t become part of your genome. It’s eliminated through normal cellular processing mechanisms once it’s done its job of creating antibodies.”

But couldn’t those antibodies also target syncytin-1 and cause the body to attack and reject the protein in the human placenta, leading to infertility? That’s the contention making the rounds.

This claim can be rejected on scientific grounds alone, according to experts. To begin with, the corresponding strings of amino acids on the two proteins are very short and not quite identical, making it highly unlikely that antibodies would mistake one for the other. One scientist compared that possibility to the likelihood of any random individual being confused with a criminal because both were wearing the same commonly sold red bracelet. In addition, as Immunologist Andrew Croxford points out, there’s a good chance of finding similarly sized, or even larger, “homologous regions” — matching strings of amino acids — when you compare any two protein sequences of sufficient length.

(Do you want to try it yourself? Learn how!)

Indeed, that’s exactly what Croxford found when he compared the 1273 amino-acid sequence in the SARS-CoV-2 spike protein to the three most common proteins in the human body: collagen, hemoglobin, and actin. “If these vaccines were to induce autoimmune responses against actin, hemoglobin and collagen, it would have been seen in the [clinical] trials,” he notes, “and, trust me, fertility, would be the least of our problems.”

Real-world experience also refutes the claim that the vaccine harms female fertility. Importantly, the body’s natural immune response to COVID-19 illness also involves making antibodies to the virus’s spike protein. If the antibodies produced in response to natural infection were also attacking syncytin-1, which is directly involved in supporting placental functions, we would expect the COVID-19 illness to be associated with miscarriage, particularly early in pregnancy. But there is no evidence that pregnant patients with COVID-19 experience the kind of early pregnancy losses predicted by this type of inappropriate immune response directed against placental proteins. In a case-control study of 225 pregnant patients published last fall, researchers concluded that even severe COVID-19 illness during the first trimester of pregnancy did not predispose patients to early pregnancy loss.

And we already have evidence that vaccination does not prevent conception. Although clinical trials of COVID-19 vaccines intentionally excluded volunteers who were pregnant or planning to become pregnant, unintentional pregnancies occurred during the trials. During the Pfizer trial, for example, which included more than 37,000 people, 23 women conceived — 12 who had received the vaccine and 11 in the placebo group. None miscarried or reported other complications.

It all comes down to weighing the hypothetical risk of vaccine complications against the very real dangers associated with becoming ill with the virus. “There are compelling reasons why the American College of Obstetricians and Gynecologists, the American Society for Reproductive Medicine, and the Society for Maternal-Fetal Medicine issued a joint statement to refute this misinformation and why they recommend vaccination for pregnant and lactating patients,” Stuopis says. “We have no logical reason to believe that the vaccine impacts fertility in any way, but we have plenty of evidence that pregnant individuals who become sick with COVID-19 get sicker, on average, than non-pregnant individuals.”

According to the CDC, “pregnant people with COVID-19 have an increased risk of severe illness, including illness that results in ICU admission, mechanical ventilation, and death, compared with non-pregnant women of reproductive age.” COVID-19 may also be associated with potentially life-threatening pregnancy complications, such as preeclampsia, a condition characterized in part by dangerously high maternal blood pressure. In at least one case, the SARS-CoV-2 virus infected the placenta during an illness that occurred in the second trimester.

“After more than a year of treating and studying this illness, we can say unequivocally that COVID-19 infection has well-documented risks to both mother and fetus,” Stuopis reiterates. But she acknowledges the difficulty of challenging the constant stream of misinformation flooding social media. “I am constantly telling patients, ‘Please, stop listening to your friends and relatives who are sharing these posts on Facebook. Listen to the scientists and to your doctors.’ If you’re pregnant or trying to get pregnant, contracting COVID-19 is almost certainly more dangerous than getting vaccinated.”