Don’t let down your guard. Or your mask!

“I passed several people who were eating close together in a common area (obviously, without masks). And, when I walked back later, they were sitting around talking with masks off.”

“I see several people working in this conference room during the day (with masks, but without adequate distancing). It seems they are eating and drinking in the room too — evidenced by empty drink bottles and food containers.”

“As I was walking through Stata to get to the parking garage, I witnessed six people crowded around a small table together eating. They were sharing several takeout food containers. No distancing at all.” 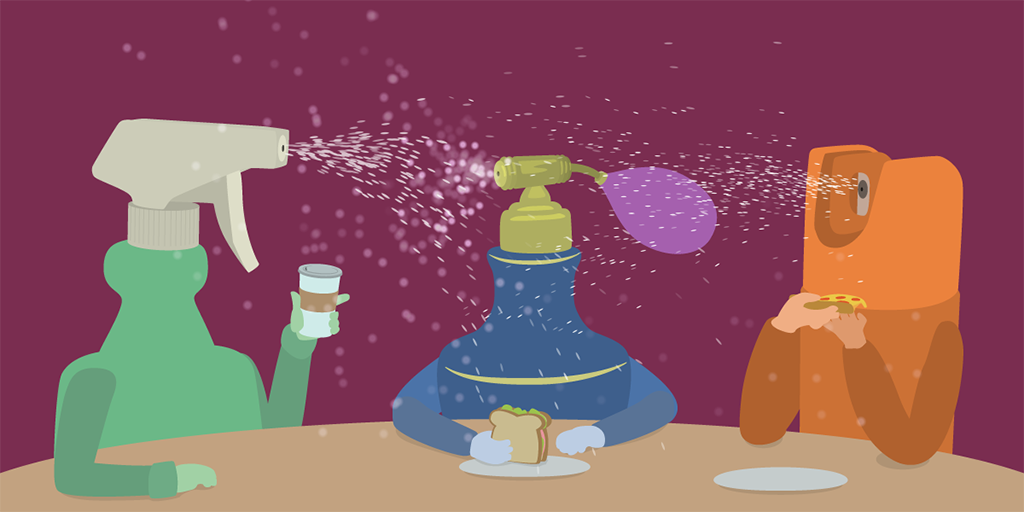 We’ve now spent many months distancing and wearing our masks. Individuals coming to campus regularly are taking even more precautions; access is contingent on daily attestations about possible symptoms and frequent testing.

Testing, in particular, has a way of making people feel safer. It can be difficult to remember that a test is just a snapshot in time. A negative test today doesn’t mean you wouldn’t test positive tomorrow — and be capable of infecting other people right now. Still, with the state’s positive test rate hovering around 4.5%, MIT’s current Covid Pass positive-test rate of about 0.25% may feel negligible.

In fact, it’s a whopping 380% increase over the 0.05% rate we maintained for the first few months of the fall semester.

“Our positive-test rate is headed in the wrong direction,” says Medical Director Cecilia Stuopis. “MIT is not an oasis disconnected from what is happening around us; our numbers are rising, just like the rest of Massachusetts. Campus is not a safe haven where we can get away with being careless.”

And as reports like those above are becoming ever more frequent, Stuopis is sounding the alarm. “Sitting down together to share drinks or a meal is among the riskiest activities for transmitting the virus,” she notes. “Our masks are off. We’re usually talking. And we’re within six feet of each other, indoors, often for much longer than 15 minutes.”

We’re most likely to let our guard down with people we know and trust. This is true even of people who should be among the most likely to know better, Stuopis says, pointing to major outbreaks among staff members at Massachusetts General Hospital, Holyoke Medical Center, Baystate Medical Center, and the Mayo Clinic. All were traced back to staff members eating together during breaks. “We should not have the attitude that this can’t happen here,” she says emphatically.

Nurse Practitioner Jackie Sherry concurs. As MIT Medical’s clinical service lead for occupational and environmental medicine, Sherry is spearheading MIT’s contact-tracing efforts. “When we talk with people who have tested positive or become ill, the common denominator is very often gatherings where food and drinks were served and consumed,” she says. “And the contacts of these positive cases who end up testing positive themselves often had an exposure related to eating or drinking together.”

So far, Sherry notes, these “eating events” have occurred in the outside community. “But,” she adds, “if we continue to take these kinds of risks on campus, an outbreak that begins here and spreads within our own community is very likely.”

But still preventable, Stuopis emphasizes. “Whether you are on campus or elsewhere, think twice — and then think again — before you pull down that mask to share a coffee or a meal,” she says. If you get the urge to plow through some Clover takeout with your coworkers, do it safely: propose a Zoom lunch, where you all log in and dine remotely at your desks. Or, if you’re feeling adventurous, don some layers and eat your lunch outdoors, with plenty of space between you.

For now, however, the safest choice is to eat that sandwich or those reheated leftovers solo. “Laughing alone with salad” isn’t half as much fun as stock photos make it look, but we promise that it beats getting sick or spreading the virus to your family, friends, and colleagues.

I got the COVID-19 vaccine! Can I toss my mask?
SPOILER ALERT: Nope. For now, even after being fully vaccinated, we all must continue to take precautions to prevent transmission.