Can you get COVID-19 again? Can you transmit it to others?

My brother had COVID-19 in March. He was quite sick but didn’t need hospitalization. Now he is going to family birthday parties and hanging out with friends. He is not concerned about wearing a mask, even around our elderly mother, because he says he is immune to the virus now and couldn’t be contagious. Is that true? And even if he is immune, if one of his friends contracts the virus, could he pass it to our mom? 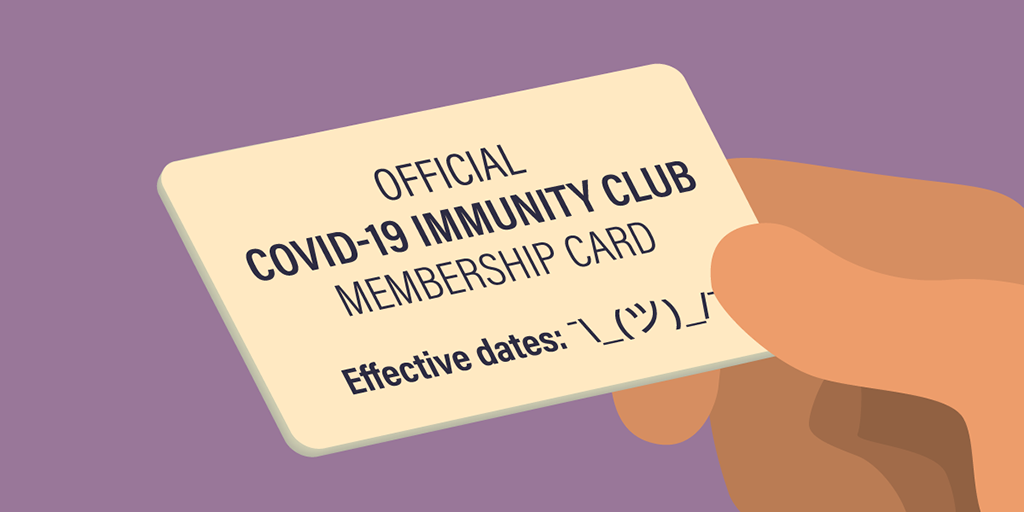 Unfortunately, we still do not know what kind of immunity a person has after recovering from COVID-19 or how long that immunity might last. And even if someone is, at least temporarily, immune to reinfection, we do not know for sure that they would be unable to pass the disease to someone else.

A 2007 study looked at 176 individuals who had recovered from severe acute respiratory syndrome (SARS), a previously unknown coronavirus that appeared in 2002. Researchers demonstrated that these individuals maintained SARS-specific antibodies for an average of two years and concluded that they would likely be susceptible to reinfection three years after their initial illness. A more recent study that examined the persistence of antibodies to another coronavirus, the common cold, found reinfections occurring as soon as six months after the first infection, and most often by 12 months.

When it comes to SARS-CoV-2, the virus that causes COVID-19, most scientists think that most people will have some immunity for at least some period of time after recovery. But reports about people getting sick again, or testing positive for a second time, have been circulating for months. These reports have been impossible to confirm, however, because it wasn’t clear if these individuals were testing positive for a second time due to an actual second infection or if the test simply detected the presence of residual, non-infectious, genetic material from these individuals’ first infection with the virus. We know that in some people, non-infectious viral RNA can linger for some time and that this can result in a positive PCR test, even when someone has been fully recovered for some time and is no longer contagious.

But scientists have now documented four cases of reinfection that seem to show, unequivocally, that it is possible to contract the virus for a second time. In all four cases, researchers sequenced the viral genomes from each individual’s first and second diagnostic tests and found enough differences to establish that all four people were reinfected rather than harboring leftover virus from the first infection.

The first two cases were individuals who became sick for a second time. The first was a patient in Nevada who tested positive for the virus in March, recovered from a relatively mild illness, tested negative twice in May, and then became severely ill and was hospitalized in early June. The second was a patient in Hong Kong who became ill for a second time, but with milder symptoms, four and a half months after his initial illness had resolved.

The most recent report concerns two healthcare workers in India who tested positive twice, three and a half months apart. They didn’t develop symptoms either time, but, ominously, both had higher levels of the virus the second time around. This means that, although asymptomatic, they were probably more infectious and better able to spread the virus with the second infection.

It now seems clear that recovery from the virus does not necessarily prove protective against reinfection, but fundamental questions remain. For one thing, we don’t know how common reinfection is or at what point it is most likely to occur. We also don’t know if a second infection is likely to produce milder symptoms — which is what immunologists would predict in the case of most viruses — or more severe symptoms, a phenomenon called antibody-dependent enhancement, which is less likely but also possible.

However, while we still have much to learn about the possibility of reinfection with SARS-CoV-2, you are right to be concerned about your brother’s actions, particularly when it comes to his interactions with your elderly mother. Her age puts her at high risk of serious illness or death if she contracts the virus, and we hope you can convince him to begin taking precautions to protect her, if not himself.