Three weeks ago, I felt feverish and got tested for COVID-19 two days later. My test came back positive. Soon thereafter, my husband and I both began experiencing additional symptoms of coronavirus, including chest pain, shortness of breath, chills, diarrhea, and muscle pain. Of course, it’s not surprising that he got sick too, since we live together and did not socially distance at all. The two of us had all the same symptoms, and his were even worse.

But here’s the weird part: My husband got tested seven days after he started feeling sick. His first test came back negative, so he got tested again. Still negative.

What does this mean? Was my husband sick with something else? Was my test a false positive? Did either of us have COVID-19? 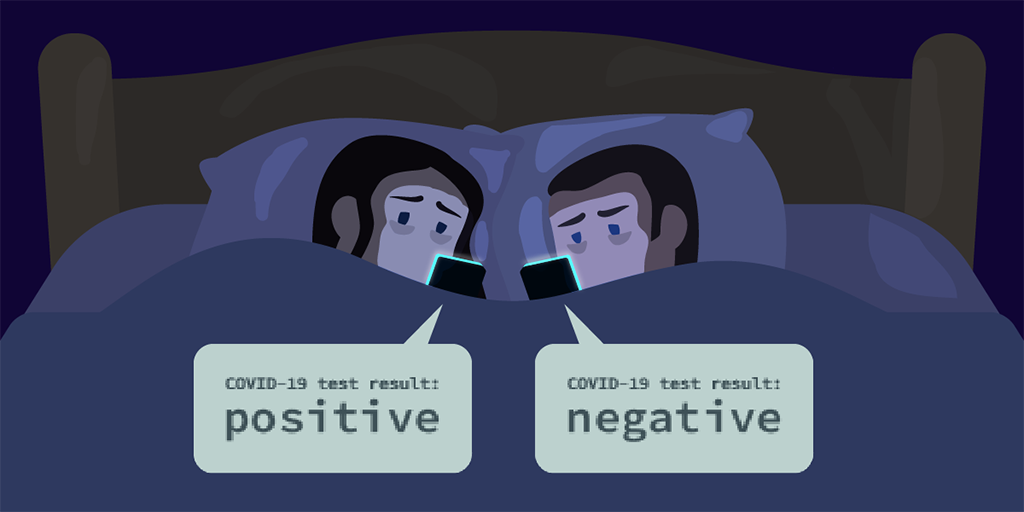 What an interesting question! The answer, most likely, comes down to a question of timing.

We’ve previously warned against being tested too soon after exposure to the virus, before the viral load is high enough to be detected by the PCR test. Your story is the flip side of that coin — an illustration of what can happen when one is tested too late, once the viral load has started to decline.

You note that you got tested two days after you started feeling feverish and just before your additional symptoms appeared. This was likely optimal timing for an accurate PCR test. Research has shown that an individual’s viral load peaks shortly after the onset of symptoms — exactly when you received that positive test.

But we also know that the amount of virus that can be detected in upper respiratory specimens declines steadily after symptom onset. One as-yet-unpublished study not only demonstrated this gradual decline in viral load; it also found no correlation between viral load and disease severity, meaning that the amount of viral material detected by the PCR test does not predict how sick that person will be.

It’s also important to note that a PCR test is a snapshot of just one moment in time. A negative test tells you only that at that one moment when you were swabbed, your sample did not show viral levels high enough to be reliably measured. It does not mean you will not have a positive test tomorrow, and — more to the point when it comes to your husband — it does not mean you would not have had a positive test last week.

You note that both you and your husband developed additional symptoms several days after your positive test and that your husband’s first test didn’t occur until seven days after that. By then, it’s likely that his viral load had declined significantly — perhaps to the point that it could not be reliably measured. In addition, if that unpublished study we mentioned above is correct, your husband might even have had a lower viral load than you to begin with, even though his symptoms were more severe.

On the other hand, your positive test was almost certainly accurate, because the false-positive rate for the diagnostic test is extremely low. But false negatives are possible at any stage of infection, so it’s extra important to get tested at the optimal time, when you are most likely to test positive if you are infected with the virus. Based on everything we know, you did exactly that; your husband, unfortunately, did not.

You almost certainly had COVID-19, and while it’s theoretically possible that your husband was sick with something else, that’s extremely unlikely. The most likely scenario is that you both had COVID-19, but he received false-negative results due to being tested too late in the progression of his illness.