Because public toilets, like those at MIT, typically don’t have lids, there’s no way to contain the droplets that are expelled into the air with a flush (never a pleasant thought, but even more so now). Is there a risk that COVID-19 could be transmitted this way? As MIT gradually reopens, what are we doing to address plumbing/restroom concerns related to health? 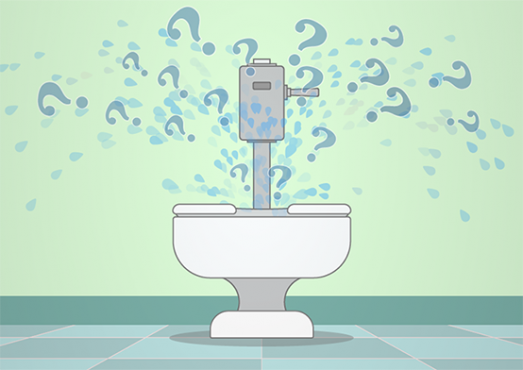 You are correct that the toilet plume — an airborne dispersal of microscopic particles created by the flush of a toilet — is a real phenomenon and, in some cases, a valid public health concern. Flushing a toilet produces both aerosol droplets that mix with the air in the room and larger droplets that land on and contaminate surrounding surfaces.

Scientists have long been interested in the possibility of toilet plumes as a vector for infectious diseases. Epidemiologic studies have found evidence implicating toilet plumes in disease outbreaks on cruise ships, in restaurants, on airplanes, and within apartment complexes. Virtually all of these cases involved pathogens that are both highly concentrated in feces or vomit and able to survive on surfaces for a relatively long time — like the norovirus, which is not only copiously excreted in feces and vomit but also able to survive for weeks on hard surfaces and resistant to some common cleaning agents.

Fortunately, when it comes to these characteristics, norovirus and SARS-CoV-2, the virus that causes the COVID-19 illness, appear to have very little in common. We know that SARS-CoV-2 can be killed by common disinfectants. We also know it has a comparatively short half-life on hard surfaces — 5.6 hours on stainless steel, 6.8 hours on plastic.

But is infectious SARS-CoV-2 virus found in feces? The answer to that question is a bit more equivocal.

We’ve known for some time that viral RNA from SARS-CoV-2 is found in feces. In fact, based on one estimate that a person infected with COVID-19 sheds between 56.6 million and 11.3 billion viral genomes per day, projects are now underway in Tempe, Arizona, and elsewhere to track community spread of the virus through wastewater analysis. But viral RNA is just a calling card of sorts. It indicates that the person who made the feces has been infected with SARS-CoV-2, but it doesn’t necessarily indicate the presence of infectious viral particles.

However, a more recent report in the CDC journal Emerging Infectious Diseases describes finding live, infectious SARS-CoV-2 in the stool sample of a 78-year-old patient in China. The patient was severely sick with COVID-19 and later died. Researchers concluded that the finding “affirms the potential for fecal–oral or fecal–respiratory transmission and warrants further study.”

“But ‘theoretically possible’ isn’t the same as likely,” says Dr. Shawn Ferullo, MIT Medical’s director of student health. “The risk is not zero, but given what we know at this point, I’d consider transmission of the virus through this route to be highly improbable.”

Individuals would also have to inhale a sufficient amount of the virus to become infected, he points out. “Even in the unlikely case that a toilet plume aerosolizes some viral particles, you probably wouldn’t be in the vicinity long enough to come into contact with enough virus to make you sick,” he notes.

“Of course,” he adds, “COVID-19 is not the only illness we’ll need to worry about as we head back to campus. Hand washing, especially after using the restroom, is a powerful weapon against all of these illness-causing germs.”

MIT will also be taking sanitation seriously. Custodial Services staff will be cleaning and disinfecting all public restrooms twice a day, Monday through Friday, with an additional cleaning on Saturday.

Bottom line? While the risk is not zero, it’s negligible. Even so, “flush and rush” is probably the best strategy in any public restroom at any time, pandemic or not. Just pause long enough to wash your hands thoroughly on your way out.