Dear Lucy: If my pancreas doesn’t work because I’m diabetic, does that make me more or less likely to develop pancreatic cancer? —Worried 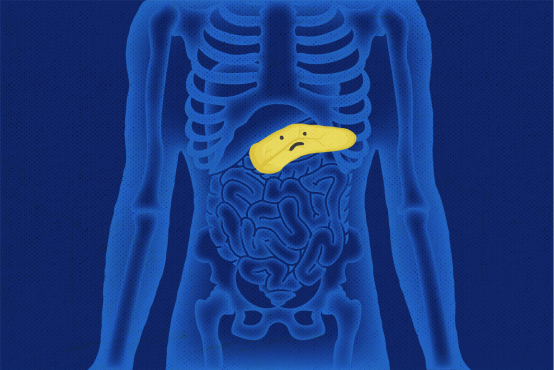 Dear Worried: Thank you for a brief but intriguing question. Lucy knew just where to turn for an answer — former Medical Director and Endocrinologist William Kettyle, who was more than happy to talk with Lucy about the pancreas, which he describes as “a busy and complex organ.”

Busy, indeed! “The pancreas provides insulin and other hormones that regulate energy metabolism. At the same time, it makes enzymes that are vital to the proper digestion and processing of the foods we eat,” Kettyle tells Lucy.

“Diabetes is the most common form of pancreas-related dysfunction,” he continues. “In type 2 diabetes — the most common type and the type associated with obesity, advancing age, and family history — the pancreas is hugely overworked because of wide-spread resistance to the function of insulin. The pancreas tries hard to meet the body’s insulin needs but, eventually, is unable to keep up with the demand.”

In answer to your question, Kettyle confirms that individuals with diabetes, particularly type 2 diabetes, have about double the risk of developing pancreatic cancer compared with non-diabetic individuals. But while a two-fold increase in risk sounds ominous, Kettyle notes that the overall risk of pancreatic cancer is low, just 1.6 percent. So even if that risk is doubled, it’s still relatively low — slightly more than 3 percent over the course of a lifetime.

Still, the connection between diabetes and pancreatic cancer has generated much research and discussion, Kettyle tells Lucy. “It’s the old chicken-versus-egg question,” he continues. “Which comes first? On the one hand, having type 2 diabetes — and the high levels of insulin associated with this condition — may increase the risk of pancreatic cancer. Or it could be that the beginnings of pancreatic cancer affect pancreatic function, which leads to the development of diabetes.” Kettyle thinks both mechanisms may be at play in different cases.

“But,” he concludes, “like any risk determined from population studies, the impact on any one individual is difficult to assess, may not be actionable, and may increase anxiety.” In other words, even as an individual with diabetes, you probably shouldn’t spend too much time worrying about the possibility of developing pancreatic cancer.

Rather, Kettyle advises you to concentrate on improving your overall health. “Managing the risk of pancreatic cancer for anyone, but especially for an individual with diabetes, should include stopping (or not starting) cigarette smoking, keeping one’s weight at a healthy level, and exercising regularly,” he explains. “All three of these factors — cigarette smoking, obesity, and inactivity — have been associated with increased risk for pancreatic cancer. Luckily, weight management and exercise are also part of a good diabetes-management program, so that’s a twofer!” he exclaims.

Kettyle also advises this reader and others with diabetes to discuss specific concerns like this with their own clinicians. “Depending on your individual situation, and as science progresses, there may be important steps you can take to minimize your risk or improve your outcome if you do develop pancreatic cancer,” he notes.

Lucy echoes Dr. Kettyle’s advice about pursuing a healthy lifestyle, whether you have diabetes or not. Exercising regularly and maintaining a healthy weight not only lowers your risk for many kinds of cancers, it also lowers your risk of developing diabetes in the first place. And, in contrast to the relatively low risk for pancreatic cancer, Kettyle notes that the lifetime risk of developing diabetes is a whopping 35 percent.

Lucy thanks you again for an interesting question and the opportunity to set a new record for the highest-ever question-to-answer word-count ratio. She hopes this has answered your question, allayed some of your concerns, and provided a plan for action. —Lucy