November 15, 2017
Is wasted sleep wasted sleep?
Dear Lucy: I recently bought a Fitbit, which tracks my exercise and my sleep. The sleep tracker gives me a graph for the night before that shows periods of sleep, wakefulness, and restlessness. But I’ve noticed an unexpected pattern: On nights when I’ve consumed alcohol near bedtime, Fitbit shows that I’ve slept deeply and have been less restless or wakeful. On nights when I’ve consumed no alcohol, my sleep appears very restless. On the other hand, I can’t say that I feel significantly better rested on post-alcohol mornings.
Anyway, everything I’ve read says that the concept of “a nightcap to help you sleep” is a flawed concept. But Fitbit seems to disagree. Am I an exception to the rule? What do you think is going on here? —Beery Bedtime 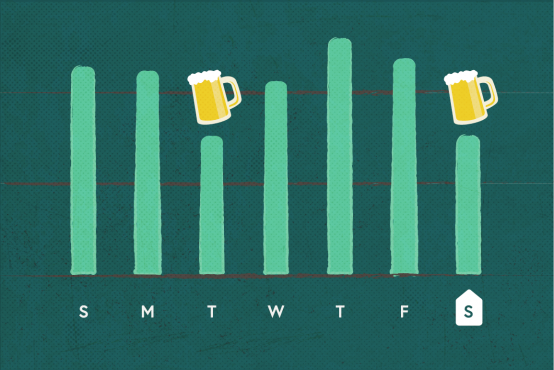 Dear BB: “Very interesting question,” Lucy murmured, eyeing the fitness tracker on her left wrist suspiciously. Lucy, who loves numbers as much as anyone at MIT, has reveled in her self-collected self-data for many years. Could it be possible that she’d spent as much as $99 at a time on devices that are not perfectly accurate?
“Probably,” says MIT Medical Psychiatrist Jack Lloyd. Though Fitbits and similar trackers may be pretty accurate when it comes to number of steps taken in a day or general activity level, he says, they can be less than perfect when it comes to measuring sleep.
“Fitbit measures sleep quality by using movement as a proxy,” Lloyd explains. In other words, the device associates how much you move with how well or poorly you sleep. “Most of the time,” he continues, “this association has some merit. But it breaks down when comparing ‘intoxicated sleep’ to ‘sober sleep’. While you may move less while sleeping drunk — which your Fitbit will interpret as ‘good sleep’ — that sleep may not actually be more restorative or restful.”
And while you might expect fitness trackers that measure heart rate to perform better at this task, Lloyd says that’s not necessarily the case either, because alcohol also slows heart rate.
“Basically, no matter whether the Fitbit is measuring movement or heart rate, alcohol — as a central nervous system depressant — will produce physical effects that make your fitness tracker think you are sleeping deeply,” Lloyd says, “Unfortunately, the Fitbit doesn’t measure the physical changes in brain waves that are truly indicative of the various stages of sleep that provide cognitive and physical restoration.”
In fact, he adds, “what your reader has heard is true: alcohol does not promote that kind of sleep, which is why he or she does not wake up feeling particularly well rested on post-alcohol mornings, despite what that Fitbit may claim.
Lucy thanks Dr. Lloyd for this excellent explanation — even if it did shake the steadfast trust she once had in her fitness-tracker data. And, dear reader, Lucy suggests that you check out MIT Medical’s plethora of online sleep resources, including practical tools for getting a better night’s sleep without a nightcap. Sweet dreams! —Lucy