Should I squelch the belch?

Dear Lucy: Many years ago, I developed the ability to belch on cue. I still can, but only rarely do. Now I have acid reflux disease. Could the two be related? —Urrrrppp 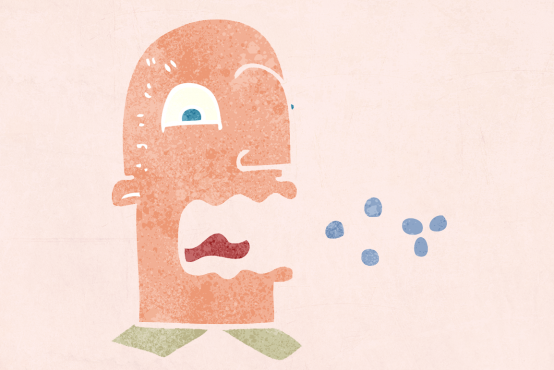 Dear Urrrrppp: Lucy finds herself strangely fascinated by your unique gift. Though not the sort of talent one might wish to exhibit every day, Lucy is quite certain there are situations wherein the ability to belch on cue would be ever so useful. But might this form of self-expression also lead to problems with acid reflux? Fortunately, Lucy knows a man to knows about such things, MIT Medical Gastroenterologist Richard Gardner.
Though Gardner declined to comment on the potential social perils of voluntary belching, he assures Lucy that the practice carries no physical risks and is not associated with acid reflux disease. “Gastroesophageal reflux disease, or GERD, occurs when frequent relaxation or weakness of the lower esophageal sphincter, a muscular valve at the junction of the esophagus and stomach, allows stomach contents to leak backwards—or reflux—into the esophagus,” he explains. In contrast, voluntary belching occurs when one swallows air and then deliberately forces the air back out by contracting the abdominal muscles and relaxing the upper esophageal sphincter, which is in the throat area.
Belching can occasionally occur as a result of lower-sphincter weakness, Gardner notes, but in such cases, the air is released from the stomach, and the belching is spontaneous and involuntary, making it an unreliable party trick.
Although your burping is not to blame for your acid reflux, Gardner mentions other factors that may be associated with the onset of GERD, including the development of a hiatal hernia, a condition in which part of the stomach pushes up through the diaphragm muscle. Small hiatal hernias are relatively common in otherwise healthy people over age 50. Acid reflux may also be associated with weight gain, which, Lucy notes, is also relatively common as one grows older.
Gardner suggests discussing your acid reflux with your primary care provider, who should be able to suggest lifestyle changes or medications to help you control troublesome symptoms. He adds that if you are experiencing substernal heartburn—just below the sternum or breastbone—or frequent acid regurgitation, these are symptoms that absolutely need to be evaluated and treated. —Lucy

Back to Ask Lucy Information contained in Ask Lucy is intended solely for general educational purposes and is not intended as professional medical advice related to individual situations. Always obtain the advice of a qualified healthcare professional if you need medical diagnosis, advice, or treatment. Never disregard medical advice you have received, nor delay getting such advice, because of something you read in this column.