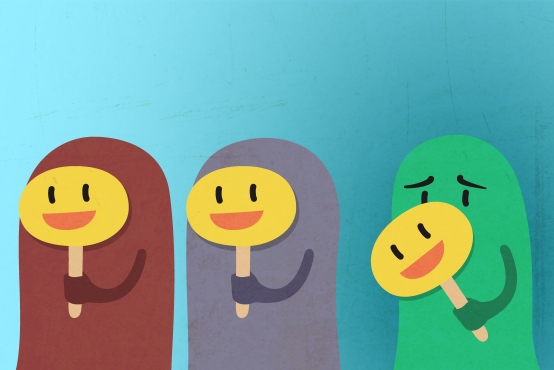 Dear FOMO: Lucy thanks you sincerely for asking this question and raising these important topics. To begin with, she would like to offer you a couple of assurances: first, that you are not alone in dealing with social anxiety, and, second, that mental health disorders are not at all uncommon—on college campuses in general or at MIT in particular.
Psychologist Evan Waldheter of MIT Medical’s Mental Health & Counseling Service backs Lucy up on both counts. “In 2014, the most recent year for which we have national statistics, approximately 20 percent of individuals between the ages of 18–25 were diagnosed with a mental illness,” he says. “Anxiety disorders are the most common mental illness in the U.S.,” he continues, noting that in a 2014 survey of 79,000 undergraduate and graduate students at 140 colleges and universities, more than half of respondents reported experiencing “overwhelming anxiety” in the past year, and almost 25 percent reported that their academic performance suffered due to some form of anxiety.
Waldheter reports that mental health disorders are as common at MIT as elsewhere. “Every year, approximately 20 percent of MIT students come in to Mental Health & Counseling with a variety of mental health concerns,” he says. “I can tell you that many, many students at MIT struggle with social anxiety. The good news is that social anxiety can be very responsive to mental health treatment, including counseling and medication.”
Like you, Waldheter wishes people would be more open in discussing mental health. “It is unfortunate that many people are still reluctant to disclose their own struggles,” he says. “This contributes to the mistaken perception that mental health concerns are rare and leaves people suffering in silence. I can assure you that you are not alone with your personal challenges. It is heartening to see a positive shift happening on campus over the past couple of years, with more and more students coming forward to talk openly about mental health.”
Lucy has also seen a positive change in how this campus is talking about mental health, finding new ways to support each other, and making it easier to ask for help—everything from being able to request a mental health appointment online, stop in for a quick, no-commitment chat with a mental health clinician, or anonymously reach out for peer support through text message. Links to still more resources can be found on MIT’s student resource pages.
Lucy and Waldheter encourage you to seek help if you have not already, including peer support, which can help you feel more connected and less alone. And thank you again for starting this important conversation. —Lucy