If life gives you lemons…

Dear Lucy: I have had bouts of gastrointestinal reflux for a while, especially when I exercise. I also love coffee, especially Starbuck’s. When I quit the coffee, I’m usually fine. So, I did a litmus test on Starbuck’s coffee and, oddly enough, found it to be very basic (I thought coffee was supposed to be acidic or neutral). Next I did a litmus test on myself and found that I was basic, too. Then I tried drinking coffee followed by lemon juice. No more acid reflux. Does all that sound right? I’m female, 52, and healthy—at least I think I am. I just want to exercise and have my coffee, too, but without the acid reflux. —Acid Test 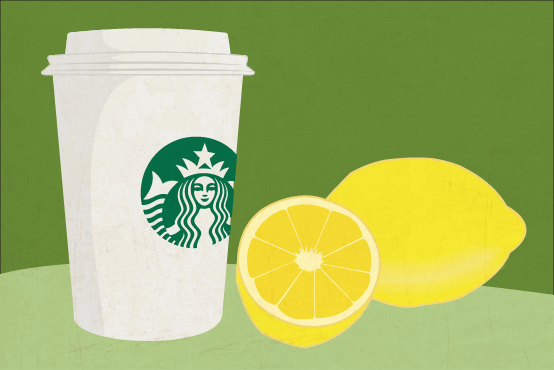 Dear Acid Test: Lucy is glad to hear that the brave tradition of using oneself as a guinea pig in the interest of science—ala August Bier (spinal anesthesia), Nathaniel Kleitman (human circadian rhythms), and David Pritchard (effects of hookworm infestation on the immune system)—is alive and well at MIT.

But while expressing admiration for your methodology, MIT Medical gastroenterologist Richard Gardner, M.D., admits to being puzzled by your results. “It’s not the pH or acidity of coffee that may predispose coffee drinkers to reflux of acid from the stomach and/or esophageal muscle spasm,” he says. “Rather, it is the caffeine content that alters normal esophageal smooth muscle activity.” Furthermore, he adds, “strenuous exercise can also be associated with increased acid reflux in susceptible individuals who are not coffee drinkers.”

Gardner couldn’t explain the apparent benefit you experienced from drinking lemon juice after coffee; in fact, he said, it seemed counterintuitive. “Lemon juice is definitely acidic and usually results in heartburn if one already has irritation from acid reflux,” he says. However, he notes, for some individuals, a component of coffee other than caffeine may be an irritant, and he theorizes that this may explain your experience. It’s also possible that your experiment didn’t control for all possible additional variables, such as other foods and beverages consumed on the same day and type or timing of exercise.

Even if you don’t want to give up coffee, Gardner recommends a few other things you can do to minimize the probability of exercise-associated acid reflux. These include: